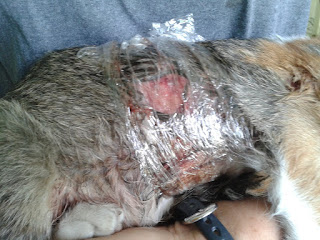 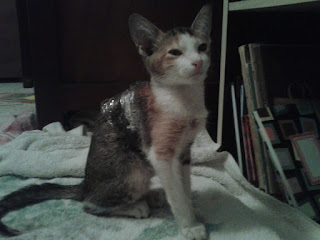 I'm sure by now most of you have heard that Gary's father, Bob Roberts was killed in a plane crash on the 9th of April in West Papua, Indonesia where he was a mission pilot for 22 years. I am so happy that I was able to become part of his family and get to know him before he died. He was an amazing man, and of course I would say that since Gary is a lot like him! :-) We were able to travel to Indonesia in time for the funeral on Friday morning. It was truly amazing that we were able to make it here so quickly. Gary and his brother Eric are very involved with the investigation, though there are still many unknowns. It has been good to be together during this difficult time. Please pray for Adventist Aviation Indonesia now and that God will direct in how things continue here. Also, please pray for Stephanie, Gary's sister, as she has been having health issues for several months now, and this is a hard enough time without added complications. Also, please pray for guidance and direction for Jan as she moves forward on her own. Ruth Boyd, who lives and works here on the same campus has written a really nice blog about Dad and that day. You can see it here:
Posted by Gary and Wendy at 11:48 PM 2 comments:

Someone posted somewhere that Cherise was very sick and please pray for
her, so we have had a few emails wondering how she is doing.

I'm not sure she actually had malaria. I was sick with a very nasty flu
(?) bug and had the worst sore throat I've had in ages. I ended up
taking an antibiotic as I was afraid it might be strep and I felt much
better within a day or so of starting that, but I thought it was
probably just coincidence, and the virus had run it's course. Then just
as I was feeling better (after about 5 days), Cherise got the same
thing, but since it is accompanied by a high fever we tested her for
malaria and it was positive, so we treated that, but she never got a
sore throat so didn't give her antibiotics. This bug seemed to have a
five day course, and after 5 days Cherise was doing some better, but
still dragging. Then on Sabbath, which was the 8th day, she didn't play
with Lyol and Zane at potluck, like she usually does. I could tell she
wasn't feeling well. Sure enough, on Sunday afternoon she got a very
high fever again. We weren't sure what to do, but Gary realized the only
thing I did differntly from her was to take the antibiotics, so we
started Cherise on them and the fever broke in the might Sunday night
and hasn't been back. She was still not 100% Monday, but since then has
been back to her old self.

So, thanks so much for your prayers. We were a bit worried as to why the
fever had come back, but are very grateful that it was a relatively easy
solution!
Posted by Gary and Wendy at 12:12 PM 3 comments: 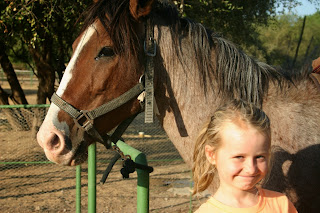 I just thought I would do a little update on Cherise. She is six years old now and a fun little girl. In fact, she is involved in everything that is going on and if she isn't she isn't happy! She is a big help to me at the nutrition center, or the market, or whatever else I'm doing, and she loves to help Daddy in the hangar, fueling up the airplane or whatever else needs to be done. She also loves playing with her local friends, their favorite past-time right now being climbing trees. I've just included a few pictures for fun. She's really the life of our party! 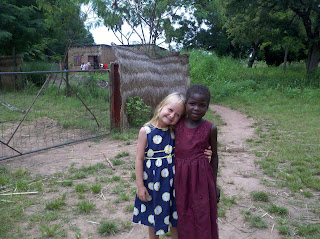 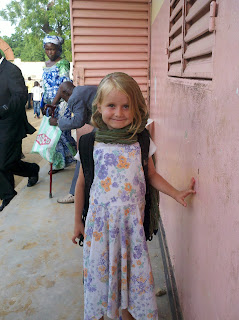 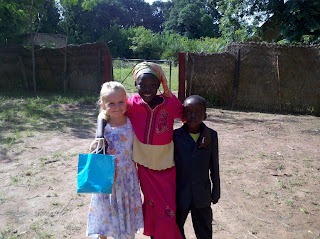 Email ThisBlogThis!Share to TwitterShare to FacebookShare to Pinterest
Written 6/4/12 He was in a pathetic state. About a year previous he had become paralyzed from the waist down, whether from an accident or from some kind of curse, we never could ascertain, but lack of proper care and sanitation had left him with sores on his back and legs that oozed the infection that was sapping his strength. His wife brought him to us to see if we could help him, but there was nothing we could do. He had already been to Béré Adventist Hospital just 4 Km from us, but he was too far gone. Thankfully, Gary, was touched by his plight and felt that there were some deeper issues and so that Sabbath we went to visit him at his home. When we arrived he was laying naked on a mat, the refuse he was laying in attracting flies by the hundreds. His father, Phillip, quickly washed him and covered him up. Phillip said he had turned his back on God and the local evangelical church wouldn't even come pray for him. As he struggled to breathe, Gary assured them all that God never turns his back on His children and gave a simple, beautiful explanation of the plan of salvation. He then prayed for him and immediately his breathing calmed and a peaceful expression replaced the previous turmoil. He died the next day, but Phillip told us he believes he made his peace with God. Now we are holding a branch Sabbath School and midweek bible study at Phillip's home. He is eagerly seeking truth and reading his bible. Please pray for Phillip, his family, and neighbors that they will be freed from the darkness in which the devil has held them so long.
Posted by Gary and Wendy at 2:23 PM No comments:

Written 8/25/12 It's been almost two months now since we accepted our first inpatient malnourished babies at the center created from Kaleb's memorial funds. Constructions is almost finished, just some finishing touches and screening need to be done on two of the three buildings, but we have been working around the masons as they have finished things up. They are also still working on the wall surrounding the property, in between the rains, but we were seeing so much malnutrition that once the buildings were livable we decided to start with what we have. So, on June 27, though not officially open, we accepted the first three babies. Soon there were more. I can not describe for you the craziness and stress of trying to figure out what we were doing and trying to get everything functional. Looking back, I can see how far we've come, and am happy with our progress, but we still have a ways to go. At first we were trying to feed the mothers as well,and even though the mothers were actually doing the cooking, it was taking all our time going to the market and trying to keep them fed since we don't know how they prepare food here, and they are really stuck on you have to eat this particular green with peanut butter, and this other one with beans, etc. So, we decided to make the mothers bring and cook their own food, and then we can focus on feeding the babies. Well, several of the moms were unhappy and left, but this is the way they do it at any other hospital in the country so especially since all the treatment for the babies is free, it really isn't asking too much of them. We were having a lot of trouble with ladies leaving. They would come for two or three days and decide it's too much work, and then just leave (taking our dishes, etc with them!). Well, this had to stop since the first 2-3 days are very intense and a lot of work for us, and then they are wasting resources since it isn't benefiting the baby to be there for 2 days only. So, we've made it harder to get in. They have to go to the hospital for a consultation and medicines since all of them need treatment for parasites, probably malaria, and some vitamins, then they need to go home, get everything they need to stay for a month and come back on a certain day of our choice. Many of them never come back, which is really sad, but at least then the ones that come are the ones who are actually willing to do what it takes to save their baby. It is so hard for us to imagine, but most of them are not willing to wake up every two hours at night, and coax and cajole their child to drink when they don't want to, or use a stomach tube if necessary. But then that is why most of them are malnourished in the beginning. It would be too inconvenient to take the baby to the farm with them, so they leave a very small baby with an older sibling who gives it water all day to keep it's belly full until mom gets back. Or it would require a lot of work to prepare three healthy meals a day, so they just buy deep fried flour balls on the side of the road, if the kid is lucky! So, we do see a lot of sad things, but we are starting to see some rewarding results as well. I had one lady who was coming to me for baby formula because for some reason she wasn't producing breast milk. So, normally this is Tammy's specialty, but since she was in the US I decided to help this lady. So, the rule is they have to work four hours for a can of formula which lasts from 4 days to a week depending on what stage the baby is at. This lady had been working for her formula for a month or two, when one day she and her husband show up at the nutrition center with their baby who is two months old, a two year old sister, and a 5 year old brother - all malnourished! The sister being severe. So, I admitted them all and at first the mother wanted to go home, but eventually she buckled down and did a great job. The sister, her name is Lundi (which means Monday in French), we called the lonely child at first. We would constantly find her sitting somewhere all by herself doing nothing, just alone. She was always happy though if you would pick her up and haul her around with you. The older brother, Jean, would also beam with delight at any attention given him. They are super sweet kids, and we all love them! But they did really well, we worked with the mom on feeding the baby and the older two kids eat and eat, so last Friday we finally let them go home. It was really exciting for us to look back at a picture of when they first arrived and see the difference! 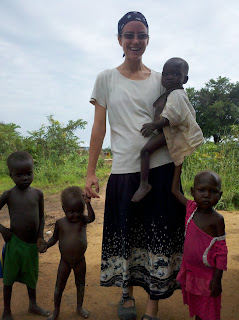 The hospital from the air.